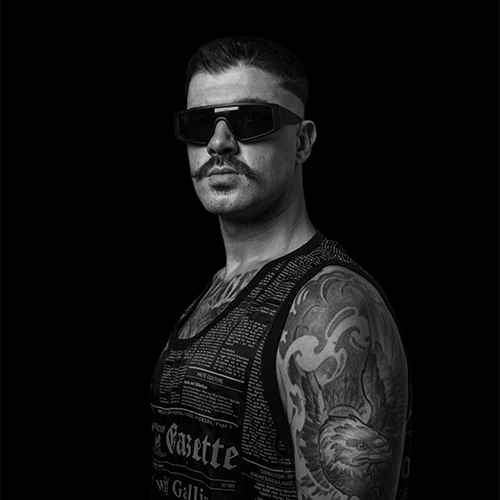 Corrado Cardone aka Konrad was born in Trani (Apulia- IT).
Dj, Producer and Remixer with a vast background and a wide musical culture, who loves to experiment in all its facets, from House Music to Techno and Trance!
When he was a child he began to discover his passion towards electronic music, looking at international Techno music panorama. After long years spent as a true Clubber throughout Italy, in 2006, he decide to pursue a career as a Dj, and in 2011 he began to produce his first releases for important record labels such as: We Are The Brave (Alan Fitzpatrick), Intec (Carl Cox), Octopus (Sian), Unrilis (Roberto Capuano), Codex (Spartaque) and Phobiq (Sasha Carassi) often releasing in TOP100 Techno Beatport with Big Banner!
His productions have also been noted and supported by some of the best DJs in the Techno scene like: Richie Hawtin, Joseph Capriati, Pan Pot, Alan Fitzpatrick, Ben Klock, Sam Paganini, Enrico Sangiuliano and many more!
In 2015 Konrad debuts in some of the best Clubs and Festivals in southern Italy such as: Cave, Parco Gondar, Clorophilla, Cromie, Guendalina, Divinae Follie, Mandarino Club and many others! Later, after few years, he also manages to make his way around Europe, working in some clubs located in Romania, Barcelona, Belfast and Amsterdam sharing the console with International and Word Artists of which: Paul Kalkbrenner, Adam Beyer, Joseph Capriati, Sam Paganini, Green Velvet and many many others. Currently Konrad continues to make him space in the world of the night and productions, aspiring to ever more important goals!